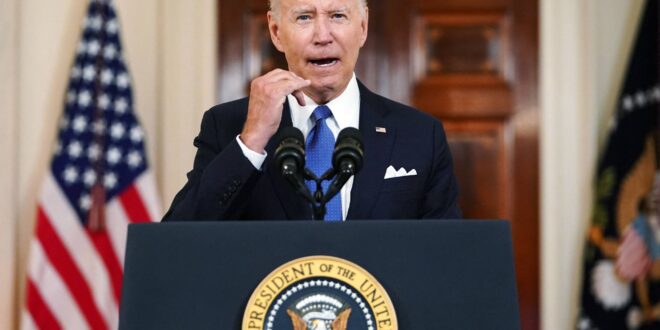 US President Joe Biden addresses the nation in the Cross Hall of the White House in Washington, DC on June 24, 2022 following the US Supreme Court's decision to overturn Roe vs. Wade. - The US Supreme Court on Friday ended the right to abortion in a seismic ruling that shreds half a century of constitutional protections on one of the most divisive and bitterly fought issues in American political life. The conservative-dominated court overturned the landmark 1973 "Roe v Wade" decision that enshrined a woman's right to an abortion and said individual states can permit or restrict the procedure themselves. (Photo by MANDEL NGAN / AFP)

What to look out for from Joe Biden’s G7 visit

President Joe Biden may be abroad in the Bavarian Alps, but as he starts this year’s Group of 7 summit, it will be challenging to ignore the political polarisation and gloomy tone he left behind.

Sunday’s agenda will centre on rising prices, which are partly the result of Russia’s invasion of Ukraine. Leaders will simultaneously try to keep up the pressure on Moscow and look for solutions to reduce price increases that have cost them all politically.

That might be a difficult task. Bans on Russian energy have pushed up oil prices globally, but leaders are reluctant to remove sanctions because they think doing so will hurt Russian President Vladimir Putin’s economy. One area in which they have declared war is the importation of fresh Russian gold.
“Regarding Russia’s capacity to conduct business in the international financial system, this is an important export, a key source of income, and a key alternative. This action eliminates that capability,

“According to a senior administration official.
At the same time, Biden is still dealing with the effects of Friday’s decision, which profoundly changed the rights of American women to an abortion and was criticised by a number of other international leaders.
The decision brought to light the differences dividing American institutions and politics, which have served as a troubling undercurrent for leaders watching Biden’s attempts to restore American leadership.

During their first day of talks in the Bavarian Alps on Sunday, Biden and the other G7 leaders will discuss how to penalise Russia while still managing an unstable global economy. A senior White House source predicted that the discussions will result in some announcements and “muscle motions.”
As Biden was taking off for Europe, John Kirby, the National Security Council’s coordinator for strategic communication, said, “A large focus of the G7 and the leaders will be, you know, how to not only manage the challenges in the global economy as a result of Mr. Putin’s war, but how to also continue to hold Mr. Putin accountable and to make sure that he is being subjected to costs and consequences for what he’s doing.”

Biden’s first engagement on Sunday will be a private discussion with German Chancellor Olaf Scholz, who is hosting the summit. This will be followed by the opening G7 meeting, which will focus on global economic problems that have been made worse by the Ukraine conflict.
The first is to keep Mr. Putin accountable, and the second is to raise the costs and effects of his war on him and his economy, according to Kirby. “And two, minimising as much as possible the effect of these rising oil prices and the way he has weaponized energy on nations, particularly on the continent but also around the world.”

This year’s G7 will be defined by how well leaders strike that balance between continuing their pressure campaign against Putin and dealing with increasing inflation, which has hurt some leaders politically at home. Prior to the meeting between the two leaders, Biden told Scholz that the G7 and NATO must continue to be united in their support of Ukraine and the Russian incursion.
“We must remain a unit. Putin has been anticipating from the start that NATO and the G7 would somehow break apart, but we haven’t and we won’t, “said Biden.

According to Biden’s tweet from Sunday morning, the leaders have decided to declare a restriction on the import of additional gold from Russia. Following energy, gold is Russia’s second-largest export.
Biden has experienced some of the worst backlash as a result of a decline in his approval ratings and an increase in pricing.

“The fact that some candidates in the primaries we’ve already seen claimed they didn’t care about Ukraine suggests that there may be increasing pressure on US politics. Cost of living is important “Before the trip this week, a European official noted. “And if the President did have an uptick in the polls as a result of his leadership on the Ukraine issue, it is quickly fading. Thus, it will have such impact.”
return home conflict

By eliminating the national right to abortion, the conservative majority of the Supreme Court, according to Biden, “rendered the United States an outlier among developed nations in the world.”
In the Bavarian Alps two days later, he will meet with the presidents of those countries, leaving behind a country whose fractured politics have alarmed the rest of the world.

The White House doesn’t think Biden’s discussions will take into account the decision or the divisions now dividing America.

The President is not at all concerned that the Supreme Court’s ruling will interfere with the discussion of these important national security matters, Kirby said.
However, four of the six other world leaders Biden is attending in Germany felt the decision was significant enough for them to weigh in.

It is unknown if the decision will come up in Biden’s private conversations. But while he represents it on the international stage, the profoundly altered and divided nation he left behind will never be far from memory.

Biden persuaded other leaders to include strong new wording denouncing China’s human rights violations in the final communiqué at the G7 meeting held last year on the Cornish coast of England. The group discussed their shared stance on China in sometimes contentious meetings held behind closed doors before issuing the publication.

Since not all European leaders agree with Biden’s assessment of China as an existential danger, the subject can lead to tense discussions. However, the President has made it very obvious that he wants to persuade other leaders to adopt a more aggressive stance. Additionally, the President’s frequent warnings about autocracies vs democracies have been reinforced by Russia’s invasion of Ukraine.

In an effort to counter China’s Belt and Road Initiative, Biden is set to announce an infrastructure investment initiative on Sunday afternoon with the help of other world leaders.
To establish new commerce connections and diplomatic ties, Beijing has invested billions in the construction of roads, trains, and ports around the world. Similar initiatives have been promoted by

Biden in the past under the name Build Back Better World.
However, now that that name appears to have been dropped, the White House is redoubling its efforts in Germany.

@@chaltaf007
Previous Russia launches missiles over Ukraine, solidifying its victories in the east
Next Will health insurance companies still provide coverage for abortions in the wake of the Roe decision?