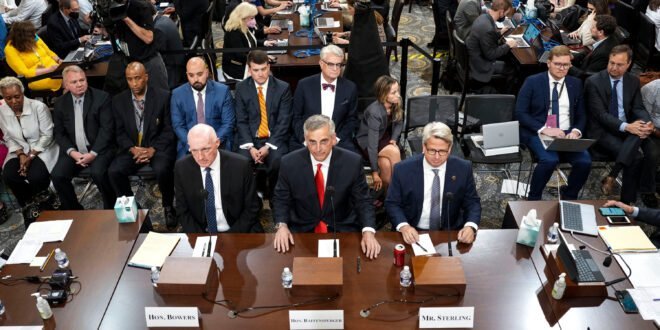 The Department of Justice subpoenaed a Trump campaign staffer on Wednesday who seemed to be present at the gathering where 11 Arizona Republicans falsely claimed to be the state’s presidential electors, according to the Washington Post.

In a video that the Arizona Republican Party published in December 2020, a guy who appeared to be Thomas Lane was seen handing out pieces of paper during the meeting when the Republicans certified that they were “duly elected and qualified electors” in Arizona.

The individual can be seen in the video donning a zipped jacket with the Trump campaign’s logo sewn onto the right sleeve. The garment bore Lane’s last name, as shown in the video.

The Post was the first outlet to note Lane’s apparent appearance in the video on Wednesday.

According to the Post, federal officials served subpoenas on Lane and three other Republicans involved in a plan to fabricate different lists of Republican electors and transmit those records to Congress. The FBI looked into the factors that led to the disturbance in the U.S. Capitol on January 6, 2021, as part of that probe.

According to Lane’s LinkedIn profile, he earned his law degree from Arizona State University’s Sandra Day O’Connor School of Law in 2020. According to his LinkedIn page, after working for the Trump campaign, he accepted a position as the Virginia Republican Party’s director of election integrity.

According to a memo, fake electors were set up to cause confusion.

The electors were a key component of an intricate plan to rig the 2020 presidential election. Since no state official had verified the fraudulent electors, they had no legal standing.

But the aim was to create confusion, according to a document issued by Trump’s lawyer John Eastman. Similar documents were provided to the National Archives and the U.S. Senate by seven states, including Arizona.

According to the letter, Vice President Mike Pence would be able to claim he was unsure which slate was the legitimate one if alternate slates existed. Then, he might disregard the official results and declare Trump the victor based only on the ballots he had access to.

The document suggested that as an alternative, the issue would be brought to the U.S. House where, in accordance with a clause also outlined in the 12th Amendment, each state would be given one vote for president. The letter said that at the time, a majority of the states had Republican majorities, providing another route for Trump to win.

The House Select Committee looking into the Capitol riot has held nationally televised hearings about the effort to carry out this strategy in Arizona and other states.

Arizona House Speaker Rusty Bowers testified before the committee on Tuesday about getting calls from Trump and his lawyer, former New York City mayor Rudy Giuliani. The men urged him to annul the results and have the state assembly appoint Trump supporters.

Therefore, Arizona and the other six states used a second strategy.

Others have been summoned for testimony.

According to the New York Times, the FBI subpoenaed three additional individuals in addition to Lane.

David Shafer and Brad Carver registered as fictitious Georgian Trump electors. According to the Times, Sean Flynn worked as a campaign assistant in Michigan.

Lane didn’t register as a fictitious elector. It was unclear what his part in the plan was.

None of the 11 fictitious Arizona electors have provided information on how they discovered their locations on the day of the signing or how the documents they signed were made.

The document’s signatories, including Arizona Republican Party Chair Kelli Ward, claimed to speak for the state’s “real electors” in a video that was uploaded the next day.

In Arizona, she remarked, “We think that we are the electors for the legitimately cast votes.”

Ward and her husband Michael, another fictitious elector, were subpoenaed by the House Select Committee looking into the disturbance on January 6.

In an effort to prevent the committee from disclosing their information, the Wards filed a lawsuit against it in federal court in Phoenix.

Nancy Cottle and Loraine Peligrino, the chair and secretary who signed the documents, have also been subpoenaed by the committee. Pelligrino claimed that the subpoena had resulted in “absolutely nothing” in a May phone interview with The Republic.

Rep. Jake Hoffman of Queen Creek, former Rep. Anthony Kern, who is running for re-election in 2022, Jim Lamon, a candidate for the U.S. Senate, and Tyler Bowyer, the chief operating officer of Turning Point USA, the organisation Charlie Kirk founded to engage young Republicans, are other Arizona Republicans who falsely claimed to be electors.

What fictitious voters hoped would occur

The bogus voters in Arizona utilised documents that were almost exact replicas of the ones used in the other six states, down to the text and typeface. Republicans introduced language stating that they would only be eligible to vote in limited circumstances in New Mexico and Pennsylvania. There was no such unclear language in Arizona’s.

Four days later, the U.S. Supreme Court was contacted in a complaint to intervene and settle the electoral problems.

The conference of the fake Arizona Republican electors would be inaccurately portrayed as occurring at the state Capitol in those court documents, lending it the appearance of official legislative approval. At their respective state capitals, electors did gather in Wisconsin and Georgia. Security barred Republican electors from Michigan from entering the Capitol in Lansing.

Later, Arizona’s slate of electors sued Pence in an effort to have the courts rule that he had the authority to choose which slate of electors to accept. This action was represented as a “friendly” gesture by Ward in a video.

According to prior committee evidence, Eastman, the Trump attorney, promoted the idea that Pence possessed such authority.

The process for tallying the Electoral College votes as specified by the 12th Amendment to the United States Constitution was unclear, according to Eastman. Eastman specifically referred to the words “… and the votes shall then be counted.”

The passive voice used in that sentence, in his opinion, indicates that the vice president will have sole discretion over which votes are counted.

A more detailed law governing the Electoral College vote count and dispute resolution was passed by Congress in 1877. However, Eastman was among a group of academics who believed that law to be unlawful.

Trump said in a speech on Thursday in Nashville that he was shocked when other advisers informed him that Pence did not have the power to invalidate state ballots, even if he believed there to be a fraud. Trump claimed that he could not see why Pence would be forced to “become a human conveyor belt.”

On Thursday, Trump said he didn’t anticipate Pence to cast the election’s outcome to Congress or decide it on his own. He said that Pence should have returned the certifications to the state legislatures instead.

According to testimony on Thursday, Eastman told members of Pence’s legal team that his plan wouldn’t hold up in court and that, at most, he would lose by a 7-2 vote.

According to the committee, Eastman requested a preemptive pardon following the incident on January 6, 2021, and in the final weeks of Trump’s administration.

Eastman texted Giuliani, “If that is still in the works, I’ve decided I should be on the pardon list.”