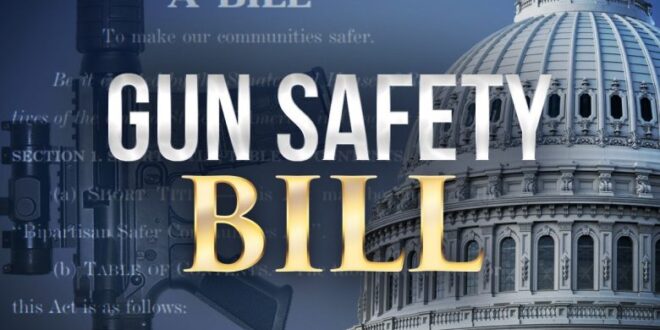 A significant, bipartisan gun safety plan is about to move forward in the Senate with a crucial vote scheduled for Thursday. With Republican backing, the vote is anticipated to pass, putting the bill on track to pass the Senate as early as this week.

Additionally, it closes the infamous boyfriend loophole, a win for Democrats who have long campaigned for it, and makes significant changes to the procedure for anyone between the ages of 18 and 21 seeking to purchase a firearm.

Despite not outright banning any weapons and falling far short of what Democrats and polls indicate the majority of Americans want, the package amounts to the most significant piece of new federal legislation to address gun violence since the 1994 assault weapons ban, which was set to expire after 10 years.

The Supreme Court invalidated a New York gun statute passed more than a century ago that placed restrictions on carrying a concealed pistol outside the home on the same day that the crucial vote on the federal gun safety bill was cast.

As the judicial branch executes the broadest expansion of gun rights in a decade and the legislative branch seems poised to enact its most important gun safety package in almost 30 years, the decision shows the competing political forces at play on the issue at all levels of government.

The vote on Thursday is intended to end a GOP filibuster and needs 60 votes to pass, which means at least 10 Republicans must join with Democrats to support it.
But after 14 Republicans voted to move the bill in the first vote on Tuesday night, that is expected to happen.

A final passing vote will be possible once the Senate ends a filibuster.
Although the precise time of a final vote has not yet been decided, Senate Majority Leader Chuck Schumer has called for the package to be passed this week. If all 100 senators agree to a timetable, a final Senate vote may happen as soon as Thursday. At a simple majority need, it will happen.

Before becoming law, the bill would then need to be considered by the House. The bill’s potential speed of passage through both chambers is not yet known, but if the Senate votes in favour of it on Thursday night, the House might follow suit shortly thereafter.

According to House Majority Leader Steny Hoyer, the House will meet and pass the gun safety package on Thursday if the Senate does it first.

He said, “We’ll attempt to accomplish it today. “We’ll finish it if they move it that soon.”

Schumer urged Senate Republicans to cooperate with Senate Democrats to approve the legislation “before the day is over” on Thursday. Senate rules allow any one member to stall the process.

After recent, terrible mass shootings at a supermarket in Buffalo, New York, and at a school in Uvalde, Texas, both of which were in mainly Black neighbourhoods, the law was put together.

On Tuesday, a group of negotiators from both parties introduced the legislation draught they had been working on in the Senate. The Bipartisan Safer Communities Act was introduced by Democratic Sens. Chris Murphy of Connecticut and Kyrsten Sinema of Arizona as well as Republican Sens. John Cornyn of Texas and Thom Tillis of North Carolina.

Before they go for the July 4 break, lawmakers are rushing to enact the bill.

It is a significant accomplishment for the negotiators who came together to reach an agreement that the bill language was finalised and that the legislation is now likely to pass the Senate.

After a number of significant sticking points surfaced, the bipartisan effort seemed to be on thin ice, but finally, negotiators were able to work out problems. In today’s extremely polarised political atmosphere, the agreement is a rare instance of cooperation across party lines on one of the most difficult subjects in Washington.

Even in the wake of numerous mass shootings throughout the nation, politicians have struggled to come to a consensus on significant gun regulation in recent years.

In a statement on the Senate floor on Wednesday, Sinema lamented the length of time that “political games in Washington, on both sides of the aisle, have halted progress in protecting our communities and keeping families safe and secure.”

The Arizona Democrat stated, “The communities across our country that have witnessed horrific violence deserve better than Washington politics as usual. Casting blame and trading political barbs and insults became the way of least resistance.” “Our communities require a commitment from their leaders to perform the hard work of setting aside politics, identifying issues that need to be resolved, and cooperating toward common ground and common goals,”

Important parts of the bill

The law offers $750 million to support state crisis intervention programme implementation and administration. The funds can be used for various crisis intervention programmes, such as mental health courts, drug courts, and veterans courts, as well as for the implementation and management of red flag programmes, which can temporarily block people in crisis from acquiring weapons through a court order.

The “boyfriend loophole” in domestic violence law, which for years prevented people convicted of crimes against married partners, partners with whom they shared children, or partners with whom they cohabitated from possessing firearms, is closed by this measure. Older laws did not cover intimate relationships between people who do not share a home, a marriage, or children. Anyone convicted of a crime involving domestic violence against a person with whom they have a “continued serious relationship of a romantic or intimate character” is now prohibited by law from owning a gun.

The law does not apply in the past. However, provided they haven’t committed any other crimes in the last five years, it will permit those found guilty of misdemeanour domestic violence offences to regain their gun privileges.

The measure establishes a new process for examining those data and offers incentives to states to encourage the inclusion of juvenile records in the National Instant Criminal Background Check System.

The legislation targets people who have in the past avoided registering as federally registered weapons dealers but nonetheless sell guns as their main source of income. Additionally, money for mental health services and school safety is increased.

GOP split over the legislation

Some key Republicans in the House and Senate leadership have begun to disagree.

The bipartisan gun accord has the support of Senate Minority Leader Mitch McConnell. However, even as the Senate edges toward passing the bill this week, top House Republican leaders are uniting in opposition to it and urging their members to vote “no.”

However, despite the opposition of House GOP leaders, some House Republicans have already declared their intention to support the measure, and the Democrat-controlled house is anticipated to be able to pass the law once it is approved by the Senate.

Once it passes the Senate, Speaker Nancy Pelosi has vowed to “swiftly bring it to the floor” of the House “so that we may put it to President Biden’s desk.”

While more is required, Pelosi said in a statement that “this package must swiftly become legislation to help protect our children.”